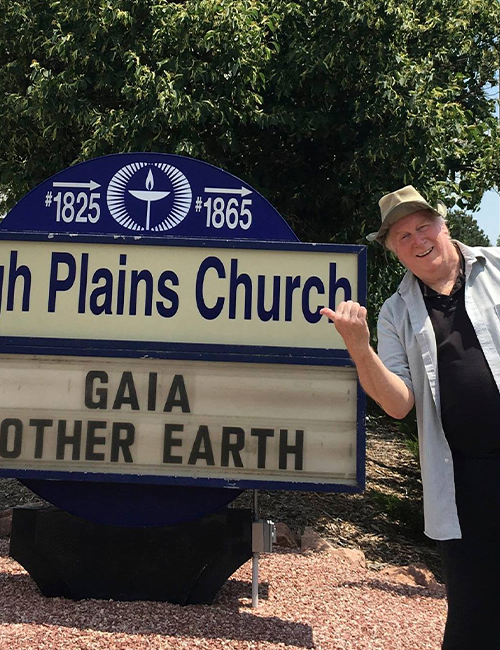 Jim Scott has brought his contemporary and multicultural music to churches of many denominations, from performing the celebrated Missa Gaia to being the worship leader or special guest musician and making a musical program from his wide repertoire.  He has visited more than 600 Unitarian Universalist (UU) Churches over a span of three decades.  His much loved “Gather the Spirit” and a number of others are included in the two most recent UU hymnbooks.  Former Co-chair of the UU Ministry for the Earth, Jim was involved in creating the “Green Sanctuary” program.  He was awarded a grant from the Fund for Unitarian Universalism to compile and arrange the Earth and Spirit Songbook, a collection of over 100 songs of earth and peace that has been acclaimed as a great resource for worship and RE programs.

In concerts and Sunday services, Jim speaks with passion on ecology, justice and peace, and often works with choirs, inspiring singers to new levels of expression.  His lyrical poetry and stories are calls to action, full of hope and gentle wit.  Though Jim is often brought in as the “speaker,” his services are always very musical.  As song-leader he lifts joyous participation from congregations.

Jim also leads workshops in church settings. In choral workshops, Jim lifts choirs to new levels of expression, mixing literal music with “by ear”and gospel style teaching.  He leads Improvisation and self-expression workshops, sometimes for the choir or open to all.  “Making Art of Our Vision,” involves delving into a little of all the arts resulting in a collective statement envisioning a better world.

In many benefit concerts for churches, Jim helps build community and raise consciousness. Inter-generational concerts are also one of Jim’s specialties, with engaging music that suits all ages.  On his new CD Gather the Spirit Jim is featured leading choral arrangements of his songs, some that included in the UU hymnbooks along with other new creations in a more spiritual vein.